Psalm 115 is a song of praise to divine love and faithfulness (v.1), a source of security (9-11) and blessings.  Other psalms suggest ‘Our nation is better than your nation’, with a sense of preference for a chosen people. Here is refreshing humility, whether applied at national or personal level. And as we were reminded at South Woden recently, humility is not thinking less of yourself, but thinking of yourself less. The psalmist also rails against the worship of dumb idols of silver and gold. These days, the idols may not be graven images but frequently they are still materialistic.

PFAS and TiS offer no antiphonal settings. Isaac Everett in TEP displays his familiarity with the roots of the psalter, declaring that the Hebrew lo lanu, lo lanu sounds so much better than the English. So he provides both languages for his simple but effective refrain that slides from E minor to D, to Dm and back to Em:

Amongst the classical composers Schütz can be relied upon for a major production. For Psalm 115 he wrote one for three choirs and instrumental accompaniment. Such motets are intended as anthems rather than antiphonal settings. However, following liturgical practice composers often inserted short introductory chants by a cantor, to which the whole work becomes a response.

The introit to this work caught my eye, partly since the accidental on Na-men has a similar effect to that Everett response mentioned above. Starting with the reciting tone on A with a B natural that could be in a mode based on A (major or minor), this accidental B flat implies a modulation. It leads into the first F chord (which has one flat on B) of the entry, moving smartly into the relative D minor. Schütz pulls out all stops at the end with several pages of Alleluia, moving to final A and D major cadences.

More approachable for small groups, Non nobis Domine by William Byrd is a short motet for three voices, just one verse and one page. If you can field a quartet, go for the short Victoria vespers setting: 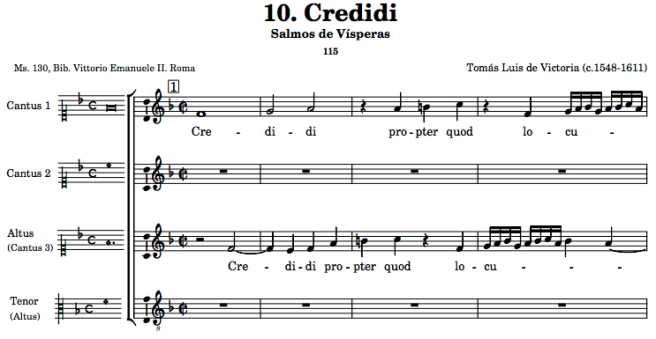 Note: The set psalms for Sunday 4 Sep were discussed in recent blogs: see Psalm 139 and Psalm 1 (alternate reading). Choice of music does not still apply.