The astute reader will discern the absence of the Lectionary reading, Psalm 30. Our leader on Sunday brings to us insights into the joys — and difficulties — of interfaith dialogue, the twists and turns of unity in diversity. 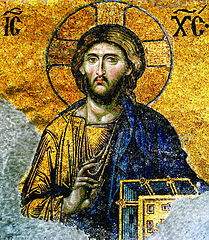 So, somewhat driven by opportunism (the leader’s recent experiences) but anticipating a retrospective blessing of circumstantial and serendipitous inspiration, we at South Woden sample the incredible riches of the Eastern Orthodox tradition.

We do so, unapologetically but humbly realising that we are outsiders, dilettantes with just toes in the deep waters of Byzantine, Greek, Balkan, Eastern European, Russian and North African liturgical traditions. We reach out in faith and empathy, seeking connection rather than authenticity.

Our leader will draw on personal experiences of Orthodox cathedrals and observance in Russia and other places closer to home, including the Greek Orthodox. Our intention is not to differentiate between the strands, but to seek commonality. Are we not a community of faith, however expressed?

Our male voices support the theme by attempting a setting of Rachmaninoff’s All-Night Vigil, Всенощное бдение, Op. 37. It will be somewhat ‘lite’; the original magnificent a cappella work, first performed by a male voice choir in March 1915, is nominally for four parts. However, it soon splits the parts and ranges from six to eight voices, at one point featuring eleven parts.

We have long valued the rich sonority of Orthodox settings of the psalms, often drawing on the work of the Monks of Chevetogne whose mission is in part seeking dialogue and convergence between Eastern and Roman Catholic liturgical rites. Our Psalm 126 setting, from a Slavonic Orthodox setting of the Beatitudes, has in years gone by delighted our own members and others further afield.

Rachmaninoff studied traditional chant patterns and utilised them, including three different styles known as znammeny, Greek and Kievian. The distinguishing characteristics need not detain us here. Suffice it to recognise a connection with communities over the centuries in Greece, Ukraine, Russia and many other countries. This week, we sing a short anthem, a small portion of the second movement of the Vigil, Blogoslovi dushe moya, ‘Bless the Lord’, drawn from Psalm 103 (Vulgate).

Additional atmosphere is offered with a Slavonian Orthodox setting of Psalm 133 on the unity of brothers and sisters across diffferences of faith, ethnicity and culture. The congregation is invited to be the choir as we join a refrain in typical Orthodox harmony; Dm  A  Dm  C.