Note: An earlier post in September 2016 on this psalm provided more commentary and looked at an early manuscript antiphon. This post briefly covers the responsorial settings offered in a few sources normally used at South Woden.

The song starts with the familiar opening declaration, appropriate for a Song of Ascent:

I was glad when they said to me, “Let us go to the house of the Lord!”

The psalmist — said to be David — continues by imagining himself and the people of God ascending through the gates of the holy city to give thanks and seek justice. (v. 4-5) The prayer of ascent also seeks peace (v.6:):

Pray for the peace of Jerusalem: “May they prosper who love you. Peace be within your walls, and security within your towers.”

TiS. First, we find an interesting piece in the ‘Red Book’ Together in Song by Abbé René Reboud. The refrain is arranged for SATB, with verses sung by either the male or female voices singing different melodies. These parts and melodies are not complex but would take a little learning. A sound sample may be heard here>.

NCH. Somewhat unusually, the refrain in New Century Hymnal passes over the peace theme in verse 6 and uses the second phrase, “May they prosper who love you”. Taken thus on its own, the refrain loses the context and acquires a slightly self-serving ring about it.

TEP. Isaac Everett, perhaps recognising this, has chosen verse 9 from this same passage at the end of the song which constitutes a prayer for Jerusalem. 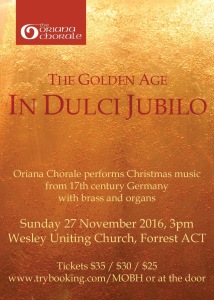 Plenty of Advent music, if not psalms, in two concerts that arise on this Sunday 27 Nov. Both include musicians from South Woden. Most unfortunately, they are programmed at exactly the same time that afternoon, 3:00 pm: