This song by Asaph voices a communal lament for the defeat of Jerusalem, seeking safety and justice until the people can “give thanks forever from generation to generation”. It’s another “How long?” song, themes taken up by many song writers including Canadians Steve Bell and Linnea Good. The psalter is riven through with songs of the blues and forbearance — at least ten of them, such as Psalms 6, 13 and on through to 119, include this anguish.

When a footnote in one of our psalters (1) cautions that this psalm should be used “with great care”, and that it “may be appropriate … focusing of situations of extreme persecution”, you know you are in for one of those bitter cries for help in time of trouble. This note, rather than putting us off, is quite helpful. There are, and regrettably will ever be it seems, such situations — think of violence in South Sudan, Syria, Burma and so on. So the song could be used to identify with and pray for those who suffer dolorous lives at the hand of aggression or repressive régimes. That source, PFAS, thoughtfully uses the more hopeful Kumbayah (but in a minor key) as a refrain:

A footnote in another of our regular sources (2) has this angle on the psalmist’s crying “How long?”:

In the Bible as a whole, it’s just as likely to be God who is putting the question to us, wondering how long it will be necessary to put up with our antics [then several Biblical references.] 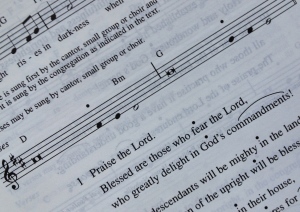 Kumbayah is fine. But far away in another galaxy, one Clemens non Papa wrote a nice four-part setting called Domine, ne memineris / Adjuva nos, from the first and ninth verses. Non Papa? How would you like to go down in history as “Not the Pope” just to make sure we knew who you were? The Belgian composer Jacobus Clemens (c. 1515-55), who worked mainly in Bruges and Paris, is known for his psalms in French and particularly Dutch.

In yet another world, the Anglican church has a great tradition of chanting the psalter in a particular style that is a satisfying evolution of ancient Gregorian tradition into more recent polyphony. It uses, as many of us do, verses with pointing markers as clues for fitting the words into a chant. Our practice is marking the last three notes, usually three syllables or words, as illustrated above. The preceding words of the phrase are all sung on the first ‘reciting’ tone.

Anglican chant has two more notes in the second line, so the last five syllables or words are allocated their own notes. There are always four notes then six, making ten in all. Once you crack the code, it’s easy with a little rehearsal to agree on the flow of the words. The example shown below, for Psalm 79 by English organist C. Hylton Stewart (1884-1932), is a little different. It has two lots of ten notes so is a truly antiphonal song; verses are sung alternately, odds then evens, usually by two groups.