The first psalm in Book 5 of the Psalter, 107 is included in the Revised Common Lectionary; but then 108 is the first of three consecutive ‘skips’, all songs attributed to David. (Thirteen of the 44 psalms in Book 5 are omitted.) Unsurprisingly,  relatively few musical setting appear in our regular sources.

There’s a little recycling going on here, with the opening five verses borrowed from Psalm 57:7-11 and the rest, the last eight verses, from Psalm 60:5-12, themselves also skips. 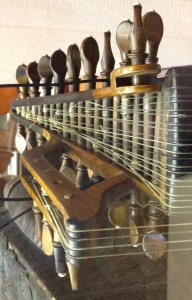 First, one of those declarations beloved of cantors and musicians:

My heart is firmly fixed O God, I will sing and make melody. Wake up my spirit! Awake lute and harp; I myself will waken the dawn. (vs. 1-3)

At times like this I wish I played a lovely old lute with many strings rather than my worn old Spanish guitar. My instrument was inherited from my family and is therefore much cherished, but admittedly has a modest sound.

Finding a good responsorial setting for 108 might be problematical were it not for Everett’s refrain slipping between D minor and Bb7 (or, to be precise, a Bb7#11 — love those extensions!) Before taking up that lute, though, the eye is caught by a mysterious little tour of the political geography, :

I will parcel out Schechem … Ephraim is my helmet … Moab is my washbasin, on Edom I throw down my sandal to claim it. (vs. 7 – 9)

The nuances are largely lost on the modern reader but David’s claim for divine influence is clear enough.

This is an extended song of prayer for justice and freedom from a serious bout of false accusation. Its omission from the RCL will trouble few readers. However, it’s worth noting that Psalm 109 sits as one of David’s dark moments between the joyful praise of 108 and 110. This juxtaposition of light and shade happens frequently within and between psalms.

In another set of three songs by David, the peace and warmth of the Shepherd psalm leavens the preceding lament of Psalm 22, used on Good Friday, and the splendour of Psalm 24 and ‘Lift up your heads O ye gates’.

Settings can be found, of course, in psalters with one song per psalm, whether Genevan, Ravenscroft or Everett. Collections like Psalms for all seasons, however, hurry past 108 to 110.

Lassus wrote a nice two-pager that might suit your sight-reading group. He follows the common path of selecting just one juicy piece of a long poem, in this case the gem of verse 20:

But deal thou with me, O Lord God, according unto thy Name: for sweet is thy mercy (BCP)

This short psalm, quoted by the writer of Ephesians, is one of praise for divine power and transcendence.

For some reason, Psalm 110 attracted far more composers than the previous two, save in modern collections influenced by the Lectionary. Monteverdi quoted Psalm 110 together with several others in his famous Vespers of 1610. Many of the big names like Buxtehude, Mozart, Vivaldi and Victoria bent their considerable talents to this text.