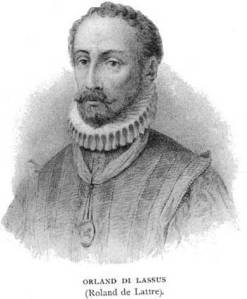 Roland de Lassus, (1532-1594) or Orlando di Lasso as he was known in Italy where he spent some years, was one of the towering composers of the late Renaissance in 16th century Europe.

His mastery, breadth and sheer productivity made him famous in his time. Dynamic and emotional by nature, Lassus in his music strove for an engaging rhetorical, pictorial and dramatic interpretation of the text.

The other great composers of the Late Renaissance period are generally recognised as :

— all marvellous composers and amongst your webmaster’s favourite fruit.

A Walloon born about 1532 in Franco-Flemish Mons, now in Belgium, he became a fine chorister at an early age. Such was the beauty and purity of his voice that he was reportedly kidnapped three times, the last excursion finding him employed in the courts of Italy where he then learned his trade. By the time he left Italy for Antwerp in his early twenties, he was already publishing books of chansons, madrigals and motets. Another decade of fine composing and singing brought him recognition and, by 1564, to Munich, where he spent the rest of his fruitful life. The listing of his compositions and publications is staggering.

Canberra organist Peter Young, currently conducting The Oriana Chorale, has said that Lassus is very under-performed in this region, and I can only agree with him.

Amongst many settings of scriptural texts, Lassus’ set of 7 penitential psalms (6, 32, 38, 51, 102, 130 and 143) is highly regarded. However, it is his relatively obscure arrangement of Psalm 105 that attracts our attention this month. This is a beautiful work for five voices, a combination used often in that period but infrequently within our grasp at South Woden.

Selections from the psalm appear on 27 July, 10 and 31 August, and 21 September so we have decided to make this a season of dipping into this historical period of Renaissance music. We present the Lassus work in Latin, the people responding in the same language.

Our male voice group on 27 July introduced this sequence of readings with a small quote from the Lassus work used as the response. True to the style of the era we sang the verses to a Gregorian chant. This will be the pattern for all occurrences of this psalm. A cantor invites the congregation for the response:

Cantor: Invocate nomen Dei / Call upon the name of God

People: Confetimini Domino / O give thanks unto the Lord

Lassus’ motet* will be an inspiring precursor to this chant and response on 10 August, a red-letter day for the Psalm Singers. He wrote the work in two parts, stretching and elaborating the first two short verses into a couple of minutes of flowing melismatic song. We shall sing just Part 1, Prima Pars, which starts thus:

The tenor enters with a statement of the first phrase. A common practice of the era was to have the melody in the tenor voice; old hymn books included special settings of psalms as ‘Fauxbourdon’ versions, the tenor being the leading voice. Sometimes this melody was a quote or based on a well-known tune from the standard church tones of those and earlier days. Other voices enter in sequence repeating the same phrase in imitation.

Our stories for the day include Jacob and his coat; the children will then be busy with a dream coats activity. Here is Lassus weaving a dream coat from a few simple verses. See where the dream takes you.

* A motet during this period (1450-1600) was a polyphonic setting of a sacred Latin text. It had some other characteristics in earlier (Mediaeval) and later periods.

I’ll have more to say about this series of Psalm 105 readings in weeks to come. The score is in the public domain (download >).

The music for the response after the chanted verses was included in the previous post on this subject.

Has anyone found a YouTube rendition of this Lassus psalm? You see what we mean about under-performed! But for another quite beautiful musical interpretation of Confetimini Domino, do please listen to the version by Vladimir Manus from the Czech Republic here>>.

Music in the Renaissance, Gustave Reed

A history of Western music, D Grout and C Pelisca