Early philosophers like Aristotle thought these were the basic physical elements of the world. The first two largely defined the basic structure of the environment. 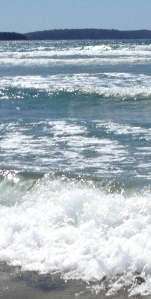 Fire and water could be viewed differently. First in general terms, separately or together in opposition like yin and yang, they might variously represent life, power, sustainment, action, or extreme danger.

A father whose boy suffered from siezures, characterised as a demon, said to Jesus: “It has often thrown him into fire or water to kill him.” (Mark 9:22)

Secondly, in Hebrew mythology specific images abound: the guiding pillar of fire, Noah’s ark riding the Flood, Daniel in the furnace, Jonah and the big fish, the obedient waters of the Red Sea, Moses in the bull-rushes or striking water from the Rock, and many other dramatic scenes.

In the poetry of the psalms, both general and specific meanings are never far away.

We went through fire and through water; yet you have brought us out to a spacious place. (Ps. 66:12)

The psalmist invokes the specifics of the escape from Egypt’s Pharaoh through the Red Sea (quoting the Exodus saga directly in verse 6 which is not included in this week’s selection – see all readings here>). In the general sense, the singer celebrates surviving personal trials to a ‘spacious place’, sometimes translated as a place of refreshment, and concludes:

Blessed be God, who has not rejected my prayer, nor withheld love from me. (v.20)

There’s more to this song than just fire and water. The poem begins in the past tense as a collective or communal thanksgiving, then moves to an individual singing in the present tense. In this later section, the imagery may bring to mind other situations, threats, or tales of deliverance. Australian readers, for example, will recall devastating bushfires; fire and drought giving way to damaging flood in the flat plains of the inland.

Fire and water will not desist at the flourish of a psalter. Trouble is part of life. It happens. We hope to emerge stronger from present trials to that ‘spacious place’.

A simple refrain in Psalms for All Seasons 66A by Stephen Warner declares: “Cry out to God in joy all the earth”. This is simple, singable and inspiring enough; we have a song-sheet on file from previous occasions but this is of little help in isolation.

To be picky, the selections in PFAS use a verse or verses that are not included in the present reading, verses 8 to 20. Neither do the refrain and verses in Together in Song 36, which cover verses 1 to 12. In either case, to be fair, the refrain is a generic chorus of affirmation so the source is not too significant.

There are a couple of versions of the PFAS Warner tune on the web but neither is an easy sing-along. Here’s one>> to at least give you the tune, even if it will not be our first choice.

At South Woden, we are going with Isaac Everett’s “We walk through fire and water, while you lead us into life.” This feels more relevant to the times. It’s a pity he does not use the original text from verse quoted above, the ‘spacious place’ or ‘place of refreshment’. You can extrapolate from ‘lead us into life’ to cover a multitude of needs. (Music can be downloaded from Churchpublishing.org

That’s the refrain sorted. But how to sing, rather than recite, the selected verses 8 to 20? Metrical versions are either rare or wildly outdated. So make it up.

[For SWUC: cantor will present verses.]

A few weeks ago an Isaac Watts paraphrase was included in the discussion of Psalm 116. If you can live with such ancient texts — to our modern ears the language is stilted, construction somewhat contrived and, unquestioned, a male God  — then you could sing a paraphrased translation from Tate and Brady’s ‘A new version of the psalms of David‘ — new in this case being the year 1696! Here are some verses:

O all ye nations, bless our God,
And loudly speak his praise;
Who keeps our soul alive, and still
Confirms our steadfast ways.

For thou hast tried us, Lord, as fire
Does try the precious ore;
Thou brought’st us into straits, where we
Oppressing burdens bore.

But God to me, whene’er I cried,
His gracious ear did bend;
And to the voice of my request
With constant love attend.

Then bless’d for ever be my God,
Who never, when I pray,
Withholds his mercy from my soul,
Nor turns his face away.

Try this to a more familiar tune, such as the one shown below from Psalm 95.

And finally, the next video is Gregorian chant, and it is in fact the desired text starting at verse 8 — if you happen to read Latin.

I include it not only for variety but also for the ancient notation. It provides examples not only of neumes (these ‘squiggles’ were common in medieval times, shown here in red-brown ink), but also the square notation which became the norm 500 years ago.

It’s also a good opportunity to follow the square notation, which has its own conventions in regard to melismatic singing, with groups of notes for one syllable of underlay.