Whoever chose Psalm 114 for the Lectionary for Easter must have been serious about it. It is the one and only psalm set for both the Easter Sunday and Easter vigil services in all three years of the cycle.

Why? This poem is all about the Exodus, the release from slavery in Egypt, and the transit to a new life across the Red Sea and Jordan River. In the Hebrew tradition this is the escape to freedom that is celebrated during Passover (פֶּסַח Pesach in Hebrew, hence Paschal as an adjective or attributive qualifier), also observed this week 8 to 16 April.

So the Lectionary just follows Jewish practice. Psalms 113 to 119 are called the Hallel Psalms, used as prayers before and after the Passover meal. Isaac Everett speculates in The Emergent Psalter that there is a good chance that Jesus sang this psalm at the Last Supper.

The song anticipates freedom in any age, escape from bondage or oppression into a better land, one flowing with milk and honey. So Easter Sunday with its message of hope is an appropriate moment for this song, as are many other situations of relief and thanksgiving for escapes from burdens of whatever hue to freedom and new beginnings.

Surprisingly given the resolute tethering of this psalm to a major religious festival, it does not appear in Together in Song. However, the cultural ubiquity of Passover and Easter observances has led to widespread reference in musical accompaniment elsewhere, from Byzantine Orthodox troparion to stomping African songs. 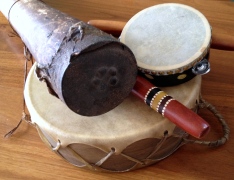 African roots influenced the gospel song based on the Exodus narrative, ‘Let my people go‘. You might remember Paul Robeson singing that opening line from verse 1.

Another so influenced is the South African refrain ‘Freedom is coming’, in Psalms for All Seasons 114C. Many versions of this lively song appear on the web, frequently with more energy than excellence. However, it’s the sort of song that calls for forgetting cares and lifting spirits rather than purity of tone. You can try this at home — see how you go with the off-beat foot stomp and clap:

In the PFAS edition, the psalm verses are sung to a sedate tone. You can easily sing this at home by choosing a few notes and singing the text freely to your new little tune. Of course, you’d have to pause the refrain video to fit the verses in. But with a text paraphrased to fit the tune, you can sing along throughout. To follow this idea, open the attached text PDF file >Ps114C paraphrasedverses.

As for the troparion, if you prefer something more exotic and remote from our usual Easter hymns, listen (here>) to a minute or so (or the lot it you wish — it goes on for over 10 minutes) to a Greek Orthodox Easter chant, Anastáseos iméra chanted by the monks of Valaam Monastery in Greek and Slavonic.

Meanwhile back in Rome, when used as a vespers psalm, 114 would be sung to the ninth tone or tonus peregrinus. In fact, it’s the only psalm that was regularly sung to this tone. These days, this means little in our daily life marooned at home on the couch. For interest though here is the peregrinus (‘wandering’, since the chanting note moves downwards) as defined in the Liber Usualis, which is the operating manual of Gregorian chant:

So when we dip into early Psalm 114 motets (113 in the Vulgate), we find for example in a five-part setting of In exitu by Augustinian monk Tiburtio Massaino (1560-1609) that he has dutifully used this tone, give or take a decoration. Like the first incipit by Louys shown earlier, it is introduced by the tenor and repeated and embellished by the other four parts along the way:

However, Louys evidently did not feel bound by the restraints of the ecclesiastical tonus pergrinus formula.

In fact, the opening phrase is almost a direct quote of Spiritu sancto by Hildegard of Bingen. Writing four centuries earlier about Ursula and the virgins, she used characteristic leaps of large intervals, even an octave as in this case, unusual for her time. Our women have sung this chant beautifully at South Woden, accompanied by hurdy-gurdy. (See post of Sep 2013)

Too much information? Don’t worry, none of this will be in the post-Covidian quiz.