While enjoying the Song Company’s ‘150 Psalms’ concert the other night (see earlier blog) —  which included the impressive seven-part setting of Psalm 20 by Robert White, a fragment of which is shown here — several singers from Psalms in the South speculated on how and why these poems came to be sung.

Written music did not appear until about a thousand years ago so what happened in David’s time cannot be known. However, internal evidence is clear, closely associating the poetry with music in worship and meditation. Psalm 98 and others invite us to sing praises with various instruments, 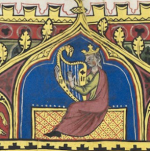 Many early manuscripts show King David with a lute. Several psalm titles include references regarding how and when to sing. The sub-title for psalms 54 and 55, for instance, says: “To the leader, with stringed instruments. A maskil of David.” We may not really know what a maskil was but references to singing and instruments abound.

Such temple directions, useful for the official temple musicians like the Korahites, remain recorded in several texts. Now, it seems, anything goes, subject to limits set by local culture and by purpose — does it enhance the experience? In worship, musical quality is important to avoid distraction or distaste: but the song should never be regarded as a performance.

Psalm songs have varied widely across the various religious traditions. It is easy to imagine a singer with simple lute or guitar quietly singing a prayer or historical tale as told in the psalms, while friends or faith community listen around the fire. In more formal settings, those who grew up with Gregorian chant or Anglican psalm forms may not dig U2 singing ‘40‘ (yes, the psalm), or Sinead’s Out of the Depths, and vice versa. But variety abounds and humans draw comfort and inspiration from different sources.

Regardless of interpretation, the Psalter has long been a pillar of the musical element of Jewish and Christian liturgical practice. As early as the 16th century and probably earlier, Western psalm tunes such as those in the Genevan Psalter were absorbed into Islamic worship in Turkey and Arab nations. This poetry has clearly influenced other religious and secular song patterns.

More detail on this subject is found under ‘Styles’.

And as to the question ‘Why sing?’ what is your answer?