This psalm is another song of ascent (psalms 120 to 134). It’s also the sixth of seven penitential psalms. The song is a statement of the mystery not only of the human condition, with all its faults and frustrations, but also of our access to grace. The psalm asks for forgiveness and redemption for Israel, though in modern context it clearly has a wider application.

These lines are in quotes because they appeared in the 1 July post. (For earlier commentary, refer to the index pages.) When Psalm 130 appeared in the Lectionary just seven weeks ago, we enjoyed Sinead O’Connor’s Out of the depths. It is probably too soon for this one again, but someone may wish to lead this nice song. Words here: Ps130 Sinead. (The instrumental break is of course optional.)

PFAS 130B, NCH Psalter 130 and TiS 81 are all good alternatives if cantors familiar with music notation are available, or if you wish to sing or improvise verses to a simple tone. [Webmaster is again absent this week, with apologies.]

For the more ambitious: 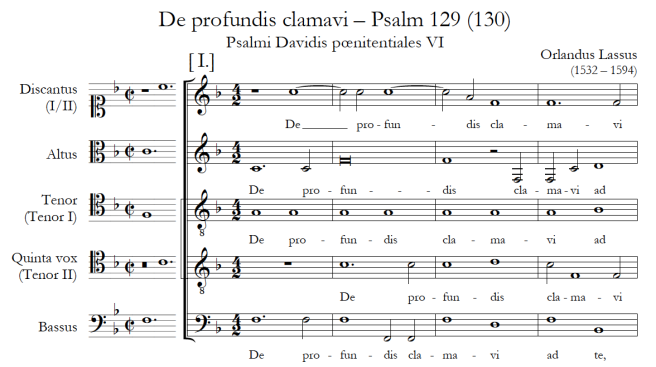 This five-part setting may be beyond the reach of most choirs, but remember that some  verses of the Lassus penitential psalms are set for three or four voices:

Praetorius also offers a trio for TTB, in German rather than Latin: