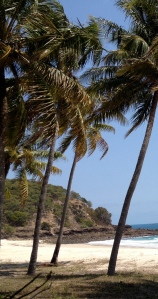 On both Palm Sunday and on Easter Sunday we are invited to hear Psalm 118. There’s a lot to this psalm so the revisit on successive Sundays is worthwhile. Many phrases are familiar, bringing to mind songs that have featured them: steadfast love; open the gates; the cornerstone; this is the day; one who comes in the name; you are my God; I will praise.

Palm Sunday. Just as Jesus enters the gates of Jerusalem on Palm Sunday, so here in the second half of the psalm: “Open for me the gates of righteousness; I will enter them and praise God.” (v. 19) Several oft-quoted lines follow:

This is the day that God has made; we will rejoice and be glad in it (v.24)

Blessed is the one who comes in the name of God (v.26)

Give thanks to God, whose mercy endures forever (v.29

An educational sign in the Red Garden of the wonderful National Botanic Gardens in Canberra, replicating the dry red heartland of Australia,  advises that palms growing in remote corners of the Kimberley may have been native to Australia or imported with aboriginal people many thousands of years ago. The particular shape of the palm frond is well-known to many peoples; they grow all over the world including around the Mediterranean and the scene of the entry into Jerusalem.

Many themes circle around within the orbit of this psalm. There’s much more to Psalm 118 than the processional song. A Paul Stookey folk song called The building block picks up verse 22, in which: “The stone that the builders rejected (‘disallowed’ in KJV) has become the chief cornerstone.” This foundational imagery, a long way from Easter eggs to be sure but no less, er… seminal, is not confined to the psalm. Isaiah is recorded as expanding the builder analogy, warning the rulers of the day: “See, I am laying in Zion a foundation stone, a tested stone, a precious cornerstone, a sure foundation: ‘One who trusts will not panic.’ And I will make justice the line, and righteousness the plummet.” (Is. 28:16)

All this was written long ‘BCE’, of course. But the idea is carried forward to the New Testament, with Jesus revealed as the stone in the first letter of Peter, appropriately enough as the apostle who was named ‘stone’: “To you then who believe, he is precious; but for those who do not believe, ‘The stone that the builders rejected has become the very head of the corner,’ and ‘A stone that makes them stumble, and a rock that makes them fall.’ They stumble because they disobey the word … But now you are God’s people … now you have received mercy.” (I Pet. 2:7-10) 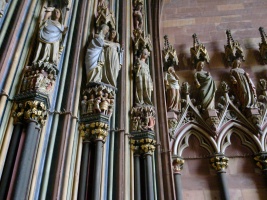 Visitors to ancient cities like York enjoy discovering quaint and remote features: the Shambles; archaeological remains of successive eras under the cathedral; hidden misericordiae within, saints and gargoyles without. The Shambles provides just a hint of the chaotic life in early times; narrow alleys, stalls, clamour, smells and all sorts of behaviour, seen and unseen. Fairness and justice were features of common law but may have felt a little out-of-place here.

These overhanging buildings, now nicely renovated and refreshed, are only about 500 years old. Concepts of justice were built into English common law long before then. The Magna Carta of 1215 is a famous example. Well before that, biblical precepts were being absorbed into official and secular mores by early rulers. 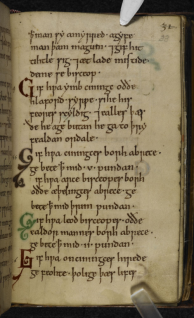 In the 11th century Archbishop Wulfstan of York (d.1023) wrote them into draft proclamations by King Cnut. The British Library notes: “The Ten Commandments were a particularly important model for the drafting of Anglo-Saxon law codes. They are referenced in the laws of Alfred the Great (r. 871–899) and formed part of the preface to his law book, grounding the secular laws in biblical precedents.”

God’s law is also specifically referenced in the longest Anglo-Saxon law code, which begins with the line, ‘I desire that justice be promoted and every injustice suppressed, that every illegality be eradicated from this land with the utmost diligence, and the law of God promoted’. This was issued by King Cnut (r. 1016–1035) with the advice of his counsellors. The text was drafted by Archbishop Wulfstan of York, and one of the eight surviving medieval manuscripts containing the text was produced in either York or Worcester in the 11th century. It was probably owned by the archbishop himself, and may contain his own annotations. The psalms tell us that the concepts of justice and equity emanate from the just Creator spirit at the beginning of time.

So here are some of the biblical building blocks of justice in the modern rule of law. They are fundamentally strong in this country despite some glaring blind spots. On the whole, however, despite centuries of law-making around the world, justice is still rough, equity lacking. And as for equality, the struggle must go on. Buyers of The Big Issue, an Australian charity magazine, may have seen a special edition devoted to the growing gap between rich and poor. Will such truths ever convince societies and governments? That corner-stone appears in verse 19. The stone that was rejected became the chief cornerstone of a new world of faith, a new system of justice and life. There is not always a keystone at the top of arches but it’s common enough. However arranged, a key block is the chief cornerstone in holding a structure together.

The Easter story opens a new chapter of this search for justice and justification. We hear every year from Psalm 118 that Jesus was the building block, despised, rejected but destined to be the basis of a whole new world and a whole new way. This way recognises and compensates for our essential inability to keep the scales of justice and equity in true balance. Here is how that enduring and powerful text looked in the 1540 Henry VIII Psalter:

This detail is included it not only for its intrinsic value but also to note that the Latin ‘caput anguli’ suggests it’s not the ‘chief’ in terms of size or weight, but the head at the top of the arch or corner of walls, holding it all together.

There are dozens of classical settings of this psalm, including some classical pieces by Renaissance and later composers. Lassus wrote one called Dominus mihi adjutor, starting with text from verse 6. There’s one for 16 voices, four quartets, by German composer Michael Praetorius (1571-1621) that runs to 50 pages in one modern transcription. All parts are shown on each page so there are but four bars per page; those pages would flick by quite fast but it’s still a major work. Praetorius (whose family name was originally Schultze, of rather less superior airs) was a German Lutheran. So, in a way, was Martin Luther (1483-1546). Luther wrote a lot of words — poems, sermons and ideas — but also several songs, including the well-known Ein feste burg, ‘A mighty fortress’, based on (you guessed it) a psalm, in this case 48. So he was quite capable of running up a good harmony. Perhaps he spied verse 17 of this psalm from a hundred paces and was moved to write the short and sweet four-part motet, Non moriar sed vivam. No doubt the text fitted his mission perfectly:

I shall not die but live, and tell the works of the Lord. 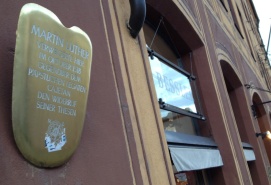 A building in Augsburg bears a plaque recording the fact that therein, Luther defended himself before the Papal investigation of 1518. His pleas fell on deaf ears, as we know (well, he was a bit rough on the Pope) and he went into hiding.

By way of contrast, in style if not underlying message, The Building Block by Paul Stookey mentioned above has long been a favourite. A cantor sings paraphrased verses, the people responding with joy, vigour and, of course, good harmony parts.

As a reading for Easter, there are a swag of settings in Psalms for all seasons to choose from. An old favourite tune suggested therein is ‘This is the day‘. It’s quite repetitive, but this suggests a possible antiphonal approach, one group serving a phrase (con brio of course) and another group volleying it back.

NCH presents one of Carolyn Jennings simple and effective refrains: “The righteous shall enter the gate of God.” Verses may be sung to a double tone.