Note: the set readings for 9 October 2016 are Psalms 66 or 111. Both have been discussed in previous posts which can be found via Library & Index in the list of pages. 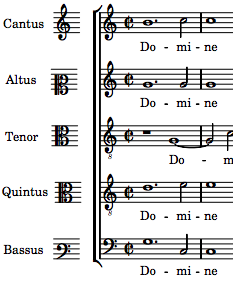 The seven so-called penitential psalms (more>) start at 6 and are sprinkled throughout the psalter, running to the fourth —  the great Psalm 51 (recipient of many settings by many composers and featured prominently in previous blogs) — through to this last Psalmus Poenitentialis VII – Psalm 143 (text here>). The Latin title quoted here is that used by Orlando de Lasso for his major collection of all seven. He rounded it up to eight by adding a composite of some songs of praise.

The opening chord of Psalm 143 Domine exaudi / Hear my prayer shown above looks quite harmless; no sharps or flats, a G major chord leading immediately to the C major triad.

Be not deceived, nor lulled into complacency. Lassus very soon diverges into all sorts of relative minors and progressions to a rich five-part song. And that’s just verse 1; remember that he wrote a section for each verse with differing voice selections. Interestingly, verse three is for three voices (another of his tricks). In this case they are for male voices and might well suit a male voice group such as ours at South Woden. It starts with a simple rising scale of an octave of C major in quintus and bass:

Lassus has featured frequently in comments on this blog, probably to the extent of bias. I plead guilty: but in my defence I must quote Isaac Everett, a self-confessed modernist and author of many rock and jazz-inspired antiphons in The Emergent Psalter, who says of the Lassus Psalmi Davidis Poenitentiales:

Even if you don’t have a choir, you should find a recording and give them a listen — it makes great ambience for a service of meditative prayer. (p. 265)