Psalm 20 appears only once in the three years of the Lectionary — and I probably missed it when it came up last year because we were in Berlin again.

After a gracious prayer for safety and prosperity in time of trouble, the psalmist (this song is attributed to David) goes on to warn against relying on chariots, weapons and warfare in achieving victory. And what is the nature of that victory? David just prays for the ability to ‘arise and stand upright’. (v.8) It would be easy to sing this little throw-away line without really noticing its importance.

Psalms for All Seasons again comes up with nice choices. (There’s nothing in TiS). We look briefly at 20A and B before the classics.

For some reason, anything Spanish is likely to exhibit, besides great music and harmonies, engaging rhythmical foundations. PFAS 20A, El nombre de Dios te ampare/May God’s holy name uphold you, is a fine example.

The harmony by Homero Perera relies on fairly conventional changes; a modest ii-V-I in C for starters, but then slipping in some nice substitutions, Ab-Bb-Eb-C. The rhythm is the winner, alternating between bars of 6/8 and 3/4 (2×3 then 3×2), as we saw recently in a much older Schütz Psalm 33. Simple enough once you get it and not uncommon, but so effective.

The PFAS performance notes are, to my mind, rather poorly placed in fine print in pages at the back of the book. However, once you find them they have this good suggestion:

And while we on the page, we note the comment on the next arrangement 20B (responsorial setting to the simple tones of a Byzantine chant) that the refrain and verses would form a nice blessing at a baptism or on other occasions.

But wait! By way of contrast, the Alternate Refrain is an equally promising Afro-American spiritual. Plenty of both riches and variety in those few pages.

I recall singing music by the English composer Robert White (1538-74) in a Tallis Scholars Summer School in Sydney a few years ago. The main agenda of that week was the Lamentations of Jeremiah according to Tallis and Victoria. White wrote a similar work. (It appears with Tallis, Palestrina, Ferrabosco and Brumel on the  Gimmel 1997 release Lamenta by the Tallis Scholars.)

This is a rather long-winded way of introducing White’s rather long, demanding setting of Psalm 20, Exaudiat te Dominus. 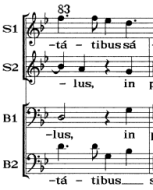 It’s written for 8 voices but not the usual double-choir SATB.SATB. The first few pages are carried by a trio of SAB. At verse 5, when the text says ‘rejoice and magnify’, White magnifies the rejoicing to five parts for a while, before changing gear again.

Unusually, the second half of the psalm is presented by two groups not of SATB but SSBB (illustrated) then AATT, with everyone in for the finale of course.