Culture, art, and especially music, are the foundation of an education that allows us to realize ourselves personally and at the same time, be present as a cultural entity, in an increasingly globalized world. I am deeply convinced that art is useful to society, contributing to the education of young people, and raising and strengthening the human and spiritual dimension of human beings.

He went on to urge that all Spaniards, and by extension anyone, should be able to: 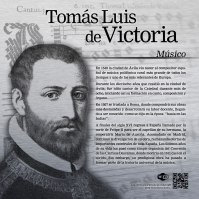 I mentioned Morales in a recent post on Psalm 18. The last named composer, however, has long been a firm favourite of your Webmaster.

Victoria wrote a huge amount of sacred work. Unlike many of his contemporaries, he wrote no secular music. His Lamentationes Ieremiah and Officium Defunctorum are particularly compelling works, transporting to the listener, thrilling to the singer.

Amongst his many works are a dozen or so psalms, including vesper psalms. Many of these are setting for alternate verses, either odd or even. The cantor would sing the other set of verses in antiphonal style, the choir responding. This call and answer style is implicit in many psalm texts (for example 136) and therefore is still widely used.

With a ‘masterpiece’ workshop and performance of the 1605 Requiem coming up on 28 May 2016 (hosted by The Oriana Chorale at 2 pm at RMC Duntroon, details here>), a little more on this magical work is in order.

The Requiem was written upon the death of the Dowager Empress Maria, daughter of one emperor, wife of a second, and mother of two more. As originally structured, it was preceded by a reading from Job entitled Taedet animam meus, set beautifully for four voices rather than the six of the rest of the mass. Together with a couple of other additions, the Requiem then forms the full Officium Defunctorum.

Peter Phillips, director of the acclaimed group The Tallis Scholars (with whom The Oriana Chorale has sung in recent years), says in the program notes of their 1987 recording of the Requiem (www.gimell.com/):

Victoria’s ‘Requiem’ Mass has for many decades and for many people typified Spanish Renaissance music. Its mystical intensity of expression, achieved by the simplest musical means, obviously sets it apart from contemporary English and Italian music, and has led to comparisons with it of the equally intense paintings of Velasquez and El Greco.

Singers who would like to participate in this experience should contact the blog author or Oriana Chorale. Or just come to the performance at: