While we are in Book 5 of the Psalter, there’s a group of three skips here in Psalms 140, 141 and 142. All are attributed to David, whose life story should inform our interpretation as we read or sing them. All contain a plea in distress.

Psalm 140. This call for rescue from attack by a violent enemy repeats the prayers of several recent ‘skips’, notably 9 and 10, 11 and 12, and even more recently 144. Once again, the bottom line is to seek justice for the poor, those who fall through the safety net. Perhaps because we have been there, done that, it gains scant attention from song-writers, though Everett provides a good refrain about justice for the poor. It might be the balm for someone feeling low.

Psalm 141. The central theme is seeking help when faced with the choice between the right thing and the easy, doubtful or plain bad. Leading up to that plea, David asks that his prayer be counted as incense and a sacrifice, before dropping in a big ask:

set a guard over my mouth, keep watch over the door of my lips (v. 3)

The supply of music for this song is more generous, with John Blow, Clemens non Papa (how’s your singing in Dutch?) and Lassus lining up in the classical category. Interestingly, all the options in PFAS focus on the raising of the prayer and being heard, rather than its content. 141C Let my prayer rise up, being by Marty Haugen, is an interesting song. Using two voices as in the structure of the psalm, he weaves a nice duet almost in the form of a round or imitation voice. 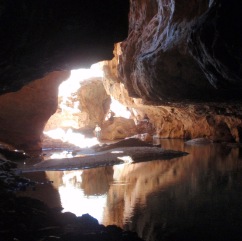 Psalm 142. The back-story in this short song has David hiding in a cave. Which one is not clear, but maybe when pursued by Saul in 1 Samuel 24 — a good read. In any event, it probably did not look like the one illustrated, which is in the Kimberley.

This is another psalm with just few settings in our regular sources; our library cupboard on Dropbox is bare of the morsels I usually try to squirrel away.