The last half-dozen psalms in the book raise songs of praise to the creator, like a symphony rising to its finale. 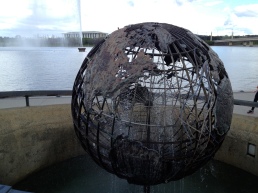 In Psalm 148, the psalmist casts around the whole creation, summoning elements from all corners to join in singing praise to the name of God. It’s a nice picture of solidarity, including natural and heavenly elements, with animals,

… rulers of the Earth and all peoples, young men and maidens, young and old together; let them praise the Name of God. (vv. 11-13)

The psalm is like a shorter version of the song that Shadrach, Mesach and Abednego sang in the fiery furnace in the book of Daniel. These three refused to worship pagan Gods and went into the fire with resolve to sing praise, calling on the whole creation to join them in this act. They were unharmed despite the flames. Nebuchadnezzar saw a fourth form like the son of God walking with the three friends of Daniel. (1)

Under stress, it seems better to call for such solidarity than to withdraw. But then again, many monastic orders and philosophers have debated fight or flight for centuries. The final verse at least assures us that:

God has raised up strength for the people (v.14)

Here’s a brief collection of just a few options:

Our own home-grown tune based on verses 11 to 13 might also suffice. It comes in two versions:

I have mentioned other aspects and music from Badev to Yoda previously (3) so enough for now.

(1)  See Tom Wright, Finding God in the Psalms, 2014. The song is not actually listed in Daniel but added in the apocryphal Song of Three.

(3) Go to the relevant library index page for previous posts on Ps.148. Yoda is here>.