The devil took Jesus to a high place and said: “Jump! You’ll be fine…

…  it is written, ‘God will command the angels to protect you; on their hands they will bear you up, so that you will not dash your foot against a stone.’ (Luke 4:9-11)

Psalm 91 is where it is written. That is why this is our psalm for the beginning of Lent, at the entry into the forty days and nights of reflection in the desert.

The whole poem is really about being in a safe place in the shadow of the wings of a caring God, despite desert, dangers, devils. 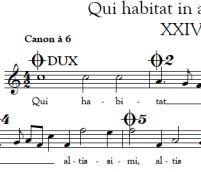 The psalm arrangement shown here in this small corner of a page is unusual. What are the large coda markers and numbers about?

The clue is in the headers; first, Qui habitat in adjutorio altissimi, XXIV vocum. The first phrase is obviously the incipit:

He that dwelleth in the secret place of the most High shall abide under the shadow of the Almighty (v.1 KJ)

Then XXIV vocum, or ‘in 24 voices’. A few weeks ago we read about several psalm settings for many voices. Josquin des Près ran this one up for Psalm 91. Twenty-four parts looks pretty fierce but the work is actually a round (‘Canon à 6’ gives it away), the song being sung sequentially by six quartets. This accounts for the numbered signs for the entries of the six groups a bar apart. What fun that one would be with a big choir.

Back to reality and the beginning of Lent. Many settings revel in that safe shelter in verse 1.