With numbers in mind after a visit to Albert Einstein’s house, I’m idly noticing the detail that Psalm 114 is sung on the 14th and Psalm 124 was on the 24th.

Well, it doesn’t look like any of Albert’s brilliance rubbed off! So forget the coincidences and note instead that this psalm contains characteristically powerful historical imagery including the Red Sea rolling back, hills skipping like sheep and water flowing from a rock.

It was the descriptions of natural forces, soaring mountains, powerful rushing waters and raw energy that resonated with Hon. Webmaster in Berne, watching the unstoppable rush of melting snow coursing wildly down from the Alps into the Aare River.

It looks peaceful enough in the photo above: close up you can feel the weight of that fast flow on its long journey to the Rhine and thence to the North Sea. The evident power of disturbed water must have rather unnerved the children of Israel making the Red Sea crossing, as much later the storms on the Sea of Galilee did the disciples.

Tremble, O earth, at the presence of the God of Jacob (v. 7)

These same ideas are reflected in Psalm 76:

At your rebuke, God of Jacob, both horse and chariot lie still.  From heaven you pronounced judgment, and the land feared and was quiet [or trembled] when you, God, rose up to judge, to save all the afflicted of the land. (Ps. 76: 7-10)

Meanwhile, over in the Exodus reading we hear this: 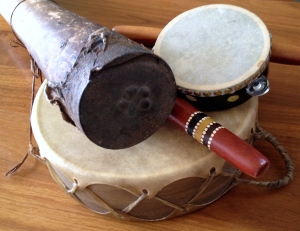 Then the prophet Miriam, Aaron’s sister, took a tambourine in her hand; and all the women went out after her with tambourines and with dancing.

This suggests that a good approach would be to celebrate with our children by dancing with Miriam, timbrel in hand. There’s plenty to celebrate; the images in the psalm suggest many ideas, such as the beauty and energy of the natural environment and the freedoms we enjoy. This can be done to any lively music of course, but one suggestion is the African-American spiritual, Glory hallelujah since I laid my burdens down (New Century Hymnal 2).

Other suggestions for music for 14 September appear as usual in Singing from the lectionary — only a few this week but PFAS 114C might be of interest. Others were made in the last Crystal Ball post.

Thanks so much to singers of Lassus’ Psalm 105 last Sunday. A great contribution and I’m sure it was delectable. (In response to my inquiry, one singer said ‘Seemed to go well — no-one threw anything … ‘) And if you are feeling keen, try this one, also from William Byrd: